ROCK BAND 101's teachers are highly-trained, experienced and dedicated to the success of our program.  No other area Rock Band classes can offer the depth and diversity of our experience.
Michaels Kevetos's extensive education in theory and composition, as well as his technical facilities on the guitar, matched with Dennis Cotton's real-world touring and session work, combine to provide an educational experience unique in other rock schools.

He has also been a private guitar teacher since 1989, opening his teaching studio Mach 1 Music in 2001

Michael Kevetos has been a professional musician for over 30 years, mainly as a performer and writer of original contemporary and rock music.


Michael has also been an “Artist In Residence” twice at the Philip R. Smith elementary school in South Windsor CT. Both of which involved writing original music with the students.

Beginning in the summer 2015 Michael and fellow musician Dennis Cotton started a Rock band class for kids called Rock Band 101. The class has been extremely successful and continues to grow. 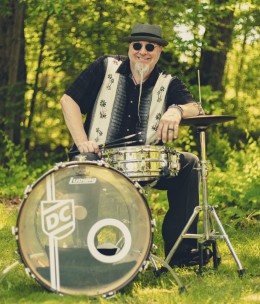 Dennis has toured worldwide from Sweden to Brazil and all of the USA.

Dennis is an award-winning record producer having produced "Going Upstairs" by EASYBABY, "Kintsugi" by Ian Costello, and "Song Bird" by Kelly Hahn. as well as albums by John Mayock and the Homesteaders and The Rich Badowski Blues Band.

Dennis is a REMO Drum circle facilitator and runs Power of the Drum, a group empowerment program for corporations, schools, and communities.

Dennis had been teaching drums and world percussion privately since 1989.
He also gives clinics and workshops to public schools.

Dennis is an endorsed artist for REMO drums and drumheads, ProMark drumsticks and SABIAN cymbals and has appeared in Modern Drummer Magazine.